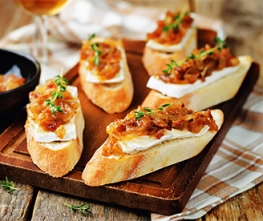 1. Cook diced bacon in a large skillet over medium heat until fat renders and bacon begins to crisp.

2. Remove bacon from the pan and set aside.

3. Drain all but one tablespoon of the bacon fat.

5. Stir occasionally until the onions are a deep golden brown.

6. Add the bacon back to the pan along with the brown sugar bourbon sauce and red pepper flakes.

7.Cook over medium high heat until the mixture takes on a jam like consistency.

8. Salt and pepper to taste and set aside. Preheat oven to 425 degrees F.

10. Remove the crostini from the oven and to 1/3 of them spoon on about a tablespoon of the bacon onion jam.

11. Top 1/3 of the crostini with sliced brie, and to the other 1/3 add a small stack of shaved prime rib. Return the crostini to the 425 degree oven and warm for another minute or two. 12. Transfer to a serving platter and finish assembly as follows.

1. Finish the bacon and onion jam crostini with a sprinkling of fresh thyme.

2. Finish each of the Brie crostini with 2 teaspoons of Honey Ginger Sauce, chopped pecans, and rosemary leaves.

3. Finish the prime rib crostini with a few baby arugula leaves, dollop with about a half teaspoon of Creamy Horseradish Sauce and sprinkle with fried shallots.