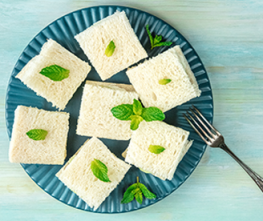 Trim the crusts and cut into pieces.

Mix softened butter with Kelchner's Beet Horseradish and a pinch of salt.

Season with salt and pepper, then top with a layer of thinly sliced radishes.

Top with the remaining bread; trim the crusts and cut into pieces.